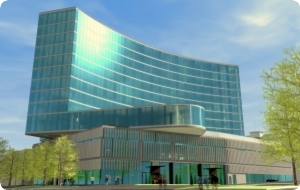 Olympic Entertainment Group will establish a new upscale hotel operated by Hilton Worldwide replacing the current Reval Park Hotel & Casino in Tallinn, Kreutzwaldi St. The new hotel and entertainment complex costing around 36 million euros will be constructed by Merko Ehitus Eesti and completed by the end of 2015. During the construction, OEG will temporarily move its flagship Olympic Casino to the premises of Radisson Blu Hotel Olümpia on Liivalaia St in Tallinn.

According to Armin Karu, Chairman of the Board of Olympic Entertainment Group, this project is a significant milestone in the history of OEG, as it constitutes the first so-called casino-hotel, which has been designed according to the company’s own vision of the combination of a high quality hotel and top casino. “For Estonia, it will be a unique and exclusive establishment, which offers a combination of extraordinary entertainment and accommodation services for business and leisure tourists, and which can be successfully sold also to such foreign markets as Northern and Central Europe as well as Russia,” Karu emphasised.

According to Madis Jääger, CEO of the Olympic Entertainment Group, as the region’s leading casino company they have always contributed above all to the top quality service, which is why it is important to find for the hotel operator a partner with highest quality standards. “To date we have come to the respective contract with the world’s leading hospitality company Hilton Worldwide and I believe that we can bring something completely new and extraordinary to Tallinn’s hotel and entertainment scenery,” noted Jääger.

For establishing a new hotel complex the current hotel and casino will end operations on 31 October this year, when OEG’s flagship Olympic Casino moves its activities to the premises of Radisson Blu Hotel Olümpia for two years. At the same time the demolition works will be commenced at the old building on Kreutzwaldi Street. It is expected that the construction of the new building will commence in February 2014 and the new building is completed in December 2015.

“It has been years since a new hotel was built in the centre of Tallinn and as a Hilton branded hotel this one will be definitely a very exclusive building. A remarkable architecture matching the Hilton’s brand adds structural complexity to high quality standards of luxury hotel.” said Tiit Roben, CEO of Merko Ehitus Eesti.

The existing hotel, of 8 storeys and 121 rooms that was constructed in 1969 and was initially known as Kungal Hotel, will be replaced by a 13-storey outstanding hotel and entertainment complex designed by architect Meelis Press. The new building will consist of a 4-storey low building topped by a 9-storey high building section. The lower part will hold a hotel lobby, casino, conference centre, SPA and a restaurant. The higher part will be at the disposal of the accommodation. The top three floors will be executive floors, where rooms have French balconies. The top floor of the hotel will be holding an executive lounge. There will be a parking lot under the building and, if possible, the roof will have a landing deck for helicopters.

OEG’s new flagship casino will be located at 1,600 m2 on the first floor of the complex. The casino entertainment area will be holding separate gaming areas for slot machines, gaming tables and club poker, special area for VIP players, additionally also a spacious casino bar with stage area and comfortable lounge.

The hotel will accommodate 202 hotel rooms, half of which will have a view overlooking Politseipark. From 5th floor upward the rooms will be overlooking the Old Town and the sea from the side facing Gonsiori Street. Hotel’s restaurant will be approximately 13 meters from the street level, offering a beautiful view of the park. SPA will be located at the same floor as the restaurant. SPA and restaurant will have an open-air terrace with catering and lounge area that can be used in summertime. Conference centre is planned on a separate floor and will consist of multifunctional rooms of various sizes, which can be divided and merged with removable walls, offering conference service for a total of 720 people.

With more than 2,500 employees, Olympic Entertainment Group is the largest provider of casino entertainment in the region. OEG is a full member of the European Casino Association (ECA). Today, the Group operates casinos in Estonia, Latvia, Lithuania, Poland, Slovakia, Belarus and Italy. OEG shares are traded on the main list of Tallinn Stock Exchange and the Warsaw Stock Exchange. All casino operators of Olympic Entertainment Group are responsible enterprises that notify their clients of the dangers associated with gambling.